Carnival in Rio has lost one sparkle...

There are times when you receive a surprise, so unexpected, it instantly seems a gift. My introduction to Zaira Brilhante was one such moment. Her first contact was merely a hello, but has opened a doorway with a gorgeous view. She is the founder of an online culture expo, which touches all aspects of entertainment, and she is building a literary showcase within that new site. She said hello to me, because of a book.

Let's get one thing out of the way, so it won't clutter the discussion:
Guys! She's engaged.

Partnered with her fiance, this Brazilian Journalist, Filmmaker, soon-to-be Literary maven, has created Cultzine. I have warned Zaira, my connections in the self-publishing world are growing into a monstrous network. When I broadcast that she hopes to meet authors, and learn of their experiences...a flood will come. (I bet that in Portuguese, a maven would be...maven.)

Connected as we all are, some of us with addiction-like passion...we prowl in desperation for a new outlet. Imagine being showcased alongside every current event in entertainment the world over. Yes, people browse the Internet for books, but how many more browse for Music, Theater, Movies, etc.? Oh, yes.  Millions and millions more. A single click aside from those attractions on Cultzine... a button with our name upon it... Zaira's doorway to something grand for every name mentioned. The world will be at our feet.

Ok, that's hyperbole. But, it will be so cool! So cool! I'm about to say groovy. (for Brazilians living in England, who are younger than a few of my pairs of shoes...groovy means very, very nice.)

Zaira Brilhante
Journalist, producer and director that moved to the UK in 2008. Loves films, theatre and music and web design. Zaira also writes @ www.whatevergirlsheis.blogspot.com. Her filmmaker website is www.zairabrilhante.co.uk.
zairabrilhante@cultzine.co.uk

Cultzine could brag of having the quickest fingers to the keys at the recent announcement of the Oscar nominees; they published the names with lightening speed, turning more than a few heads in doing it...
The site has a lean, savvy look to it; designed to be more click friendly than other entertainment sites. The lack of pure clutter is astonishing. 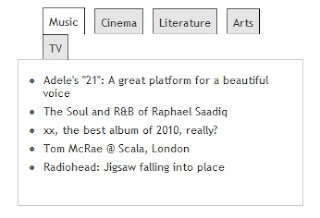 Zaira will pilot the Literature segment, when she has built a bit of a foundation for it - chiefly, connections to authors who interest her, or who show some sparkle of their own which will attract others.

I look forward to seeing this effort take off, to see where Zaira will be led. The tides are swift and strong out here. We wish her all the best.

Posted by Joel Blaine Kirkpatrick at 9:13 AM