Megaphone for a small mind... 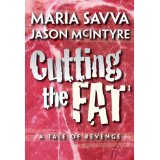 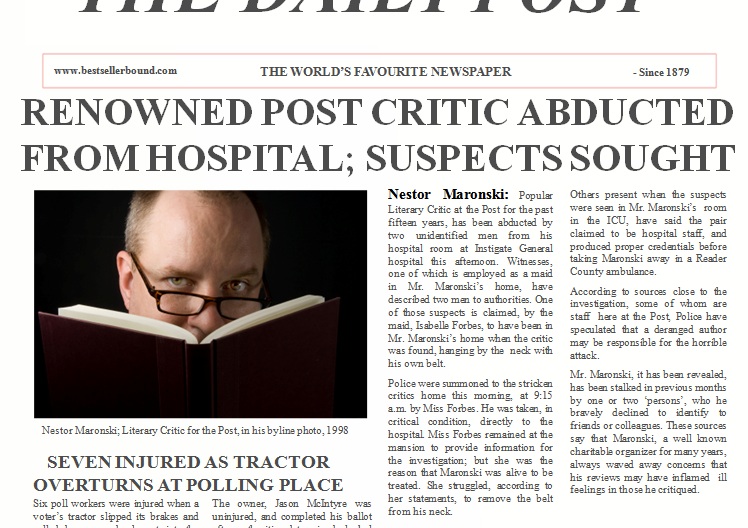 That was the front page of the Post two weeks ago. As of this morning, Mr. Maronski has not been located, and the police are still investigating.

That investigation included this very interview, written for this blog, just two weeks before the attack on the critic. Mr. Maronski’s disappearance has shaken many who were known to revile him, even those who never made their dislike public. There have been dozens, this blogger included, who had much to say about him, and about his reviews. That should in no way imply that we wish anything other than his safe return.

Nestor Maronski interview; taken by phone. (October 12, 2010 – planned release: October 25.)
This interview has been cleared by the Police department for publication.


***
I was very surprised that you accepted my invitation to this blog interview. Thank you. You are not known for using this forum at all. Do you get many invitations?
Do I get invitations?  Do I get invitations?  Have you been living in a cave? I'm THE Nestor Maronski.  Oh, I don't know why I agreed to talk to you. Look, I'm going to spend five minutes answering your stupid questions and then I'm going.  I'm a busy man.  Do you have any idea how powerful I am? If you don't ask me anything intelligent, I'll log off. And I'll get your website banned.

Your career did not begin with any literary background or study at all. Was it difficult for you, learning as you went along?
You obviously haven't been listening to me. I own this town, do you know that?  I could make sure you never work again.  Ask me something that makes sense, damn it!

You were unpublished, anywhere, before you appeared in your column at the Post?
How dare you accuse me of being unpublished... I was never 'unpublished'.  Are you trying to associate me with your self-published friends?  I've heard all about your forum.  That's one of the reasons I came here, to set the record straight... Self-published writers are a cancer in the literary world.

You seemed to be instantly known, syndicated into fifty publications within half a year. That first six months only produced five full book reviews. Wasn’t the syndication helped along by your father’s fortune?
Are you even listening to what I'm saying?  That question has nothing to do with my reply to the last one.  Ask me about your friends, the self-published author brigade.

Can you tell us about the two years you worked in the Classics Restoration department of the Nelson-Atkins Museum in Kansas City? I’ve heard they still remember you.
Are you trying to be funny?  This is an interview about my reviews.  You had better cut that question out or I'll make sure you regret it!

Mr. Maronski, you gave only two four star reviews in the first three years, and only one five star review in that time. Can you explain how those reviews, since it is public knowledge that all three authors have been associated with the Maronski corporate empire?
The Maronski corporate empire, as you call it, was built up over many years and prides itself on only doing business with the crème de la crème, the best people.  Of course those authors were associated with us, because they were good, unlike all the self-published fools who masquerade as writers.

It isn’t a secret that the majority of your reviews resemble scathing attacks on the authors themselves, not just the work you have read. Why do you lean so heavily on the authors?
Authors?  You call those people authors?  A moment ago you were saying I didn't have a literary background and now you are showing yourself as the charlatan you really are. Huh! Authors?  They all wish they could write, but unfortunately they are just embarrassing themselves.  I'm doing a public service with my reviews.  I tell it as I see it.  If they are talentless then I have to let the world know.  We can't let just anyone write a book, you know.  Do you want your children to be educated by reading a self-published book at school? No, I don't think you do.  That would be a travesty! The grammatical errors, the typographical errors.  It is so hard to get through these books sometimes.  You know the best thing would be if we had a national holiday where we burn self-published books, like a celebration of literacy all around the country.

Authors to love to talk about you, not always discreetly, behind your back. Can you comment on that incident last year with the self-published author, Dar Templeton?
Finally. A question appropriate to the topic at hand. How the literary world is generally abuzz after my reviews emerge--

Well, no, sir, I'm asking about Dar Templeton. The author? You had a run-in with him at a gala dinner.  Wasn’t he an invited guest to that event? He did have a right to be there?
Dar Templeton had no business being at the annual gala for book reviewers. To my knowledge he and some indie cohorts snuck in by way of the kitchen. I was giving a speech on the declining quality of popular fiction in this country.  Everyone was listening intently as I explained how authorship needed to be managed by the few, an oligarchy, if you will -- when that little weasel stormed up to the podium and assaulted me--

Didn't he throw a cream pie in your face?
Well yes. What does this have to do with my work?

And didn't you get in...a tussle?
I had to get him under control! This was a prestigious event filled with my esteemed colleagues.

Were charges pursued?
I pressed charges and he pressed counter charges. Now, now, now, this isn't the sort of thing your readers will be interested in. Dar Templeton is a lousy, failed author. He had a grudge to bear. Some writers have thin skin and cannot handle an accurate assessment of their skill. He was clearly a nut. I'm just thankful he didn't have a weapon at hand. Now I have security with me at all times when I'm outside my home.

If you have such trouble finding worthwhile books in the Indie arena, why devote so much time there? Aren’t there a thousand other authors, in the mass market industry who are begging you to review them?
In all honesty, the editorial staff at the Post is moving more in this direction -- against my advisement. They go on ad nauseam about how independent books appeal to a younger readership and that the Post Online version sees hits to the indie sections of the website. I appease them to a degree--if only to expose the atrocities being executed by the so-called writers of independent fiction.

There has been rabid speculation that the publishing disaster ten years ago: ‘White Hot Summer’ by Natte Pyre was really a Nestor Maronski experiment. That book was panned before the first twenty-five thousand prints were delivered. Will you own up to that, or do you still deny it?
I deny nothing. And I confirm nothing. Natte Pyre is a fine, impeccable author. The fact that the book received negative reviews only serves to bolster my argument that reviewers in this country are also suffering a foul degradation of their quality. It's as if writers and reviewers are one in the same now. Very distasteful.

Will you verify any truth to the latest rumor, that you have restraining orders against certain unnamed persons? Are some of your past reviews causing you a bit of grief?
My past reviews display the utmost affection for the written word. At least, that which displays quality. For you to ask me, Nestor Maronski, to verify such rumors is preposterous. I suggest you get this line of questioning back on track. Pronto.

What is the next book that you plan to review? Is it another Indie book?
Indie indie indie!  Why this incessant preoccupation with the numskull writing of a few talentless hacks? My next review, sadly, was mandated by the editorial board at the Post. The writer's union, of which I am a member and sitting board member are under scrutiny for a few...indiscretions. It's a book called "The Red Barn", and, actually, from other reviews and the synopsis, I may be pleasantly surprised. This one might be a diamond in the rough. But I reserve final judgement until I've read it and concluded my review. As always, your readers may look for my weekly reviews in the Saturday edition. I encourage them to read my thoughts as I have become --how would you say?-- a bit of a crusader in the fight against poor prose.

Have you had offers from any publishers, to print the first Nestor Maronski novel?
I am always fielding offers. None of them have quite managed to come up to the level my novel deserves.

What comments do you have about the upswing in self-publishing in general?  Isn’t it a good thing, so many authors finding readers when traditional publishing is ignoring new talent?
Phhh. Talent. If these self-published "writers" had talent they wouldn't generally need to go it alone, now would they? They'd have contracts and buckets of money thrown at them if they actually had talent.

Why do you still only review, when your influence in the industry would seem to make you a shoe-in success as a publisher, or even an editor?
I've done it all. Editing. Publishing. However, the satisfaction I receive from sharing with the world what is good writing and what is bad, that's where I derive the most pleasure.

Name the truly worst book you have ever read.
That dreck of what's-his-names -- Day of the Vampire? or some such. Few years back. Dreadful. Just dreadful.

Name the truly best book you have ever read.
Haven't come across any that springs to mind.  Still looking.
All set here? Good. Must run. Have the finished interview sent to my office. I'll review it, provide my edits, and let you know if it can run. Ta ta!

***
Mr. Maronski concluded the interview at this point. Has he ever had the displeasure of reading anything of mine? He did not say, though I doubt he would have passed up the opportunity to say so.﻿
Mr. Maronski refers to the self-published novel 'The Red Barn' by Richard ﻿Jameson. The review, published just days before the critic was attacked, has been approved for display here, as it has widely circulated in the public eye; Mr. Jameson is listed by investigators as a 'person of critical interest' in the case. I was not permitted to discuss any of this matter with the author, however, a few of my colleagues assure me, they will be speaking to him very shortly. 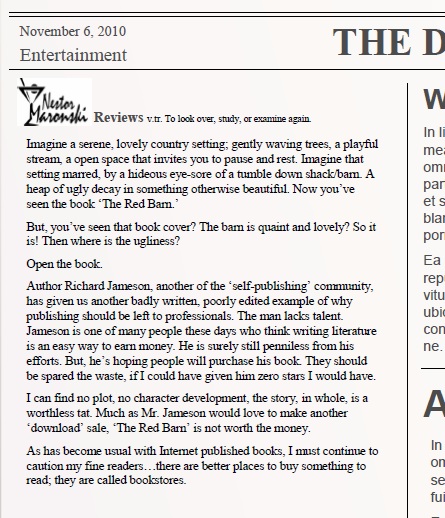 We sincerely hope those are not Mr. Maronski's final published words.
.
.
.
Comments to this post will be closely monitored.
Posted by Joel Blaine Kirkpatrick at 7:07 AM