A Rock & Roll lifestyle can bring a lot of deliciously wicked fun. It can also get you kicked off shortstop position at St. Allen the Meek's Convent softball team, as Sister Susan Helene Gottfried learned. And there were a lot of robe-room arguments they should just let her plug in her Walkman with Megadeth, and just let the little banger play. With all the mascara, she didn't need a ball cap over her wimple even on the sunny days.

St. Allen's was considered the 'reform' covent. Only the most deviant postulants ended up there. Sister Suzy had arrived quite early in her career, mostly because of the campfires in the garden. There were many in the Meek's choir who groaned it was really for her softball skills. She helped with the hopes they would finally have a kick-ass team. But, in that first game of her only season, when she tucked the hem of her skirt into the back of her bloomers and squatted the way Ozzie Smith always did it...she was marked for special penance. Screaming at the batters in notes higher than Bon Scott could reach, Suzy played that one inning at shortstop.

Only that one inning. It was the outfield, or the showers. She played center field, so they wouldn't hear what she was singing, and she could empty her clandestine box of ready-strike matches - one cute flame at a time.
St. Allen's lost 13 in a row. The choir was apoplectic - Sister Sue Hell could have made the place great, with her pipes in the choir or her screaming reach on the ball field between second and third, but Rock & Roll was in her blood and, that everpresent Walkman. Rock was getting in the way. She bolted right out from under their noses, on a field trip no less. Her group was going to a weaving class at the community center, and she scooted underneath one of the school buses in the parking lot. A few fortuitous rips, and she emerged from the other side, and invented Emo Grunge in the same fluid movement. Those knee-high stockings had been the perfect choice that day. She didn't run to a coffee shop - she ran straight to the first tattoo shop she could find.
Susan admitted it was in that shop that she first felt the tugs of her bass playing character in her now famous fictitious band. A bloke was in the first chair when she came huffing into the parlor doorway, giggling at her escape. The bloke was getting some wimpy tattoo that said stuff, with 'Forever' in it. Only partly outlined, little Sister saw the rough form of 'Trevor' on the rag-burned arm of the big dude. The raw skin, the look on the dude's face, the sound of her panting breath masking even the buzz of the needles... a presence entered her soul.
Trevor Wolff was born in those seconds; in the whirling mind of a breathless ex-nun, staring at sweaty flesh being colored with something like blood. It would have been Whitesnake's best video, because the big dude being tattooed would later begin to direct for Rock bands, and he'd never forgotten that image of Susalene and wanted to recreate that, but Coverdale had that dorky girlfriend named Tawny. Whitesnake faded, but Trevor exploded. Three doors down from the tattoo parlor was a mom and pop record store. Susan had her first job there before the sting had left the 'Forever' tattoo on the arm of that future video director.
How do you keep up with an alter-ego delusion that keeps the amps on overload? You write him and plunge into his world. Trevor liked being in the body of a lean little brunette, but he wanted to be written accurately. Suzylean followed him into the darkness he loved more. He took her into shadows where music was the only light. Trevor is not a demon. Sue was thriving and creating, making a name and attracted fame. There were those record guys, who wanted her to sign with them. Not to perform, but to help manage some bands. Trevor wanted a band. Susan said no to the suits, and she made a group for Trev. She would follow him anywhere, and he stepped only further into the rush and glory. He told her who to talk to, who to party with, where to flirt and where to toss a drink. She gave him memories, and new loved ones, and a ball-busting bass guitar. Together, they let their hair go to their asses, and together they touched the thing that burns lesser gods to ash.
Naughty Sue, who could make a nun's habit look hot, remade herself for Trevor and he taught her music. She named his band for him, and he loved it. ShapeShifter. She wanted to sing beside him forever, and he told her why he came to earth, to answer her prayers. There are three Gospels of Trevor Wolff, at this link. Susan Gottfried took that ink-as-blood visual to its corporeal form. She cannot stop writing Trevor; his heart beats through her fingertips - into his pages.
You can't say the rest is history. The rest is in your future. 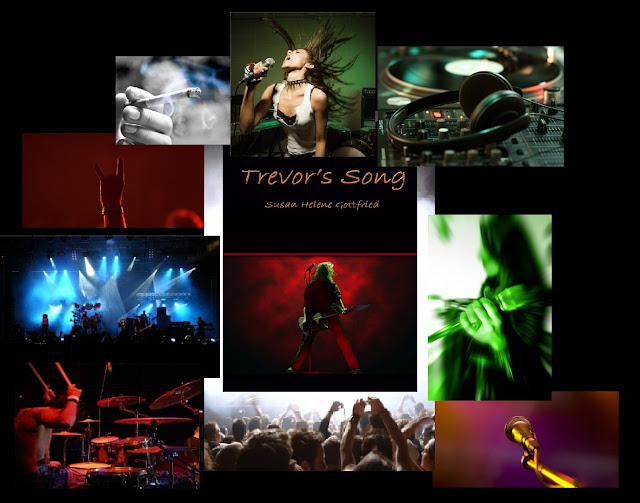 Trevor? You don't mind if I start with you? Has Susan tattooed your name anywhere yet?
Fuck no. Susan's as clean as those sheets Mitchell's mom makes us put on our beds every week.
Describe the moment that you knew she had heard you, and was waiting for you to speak again. How long had you been whispering to her?
Susan may be a prude about her body, but she's no dummy. She knew from the second I started talking that she'd lost total control. She threw up her hands and told me to go for it. She hasn't been the same since. Hell, I'd even say she's much improved, and all thanks to old Trevor here.

Susan, what were the very first words Trevor spoke to you?

It's been so long now, Joel, I can't remember.

Trevor, who put that first guitar in your hands?
Mitchell. He told me I couldn't be in the band unless I made music. I tried singing, but the dog down the street thought I was in heat. It came sniffing around. Confused me for Mitchell. That was when Mitchell said if I wanted in my own band, I had to play an instrument. He said bass was the easiest, so that's what I did. Like I had a choice. It was bass or humping dogs. There's no rocket science there.

Susan, do you play any instruments? Your husband?
I tried to be a drummer, but sucked at that. So now I play the radio, which is what people say when they want a lame attempt to be cool. Honestly, though, I am more a fan of music once it's created than I am of actually creating it.
Trevor, has Susan ever argued with you, about what to write? Who won?
Didn't you hear me? I said Susan's no dummy. She's like Mitchell: they tell me what to do and I go and do whatever the fuck I want anyway.  They shake their heads like they can't believe I did it, but c'mon. They're saving face. We all know it. Especially them.

Will we see a 'Demo Tapes - Year Three' ?
And a four and maybe a five, too. Why not? All it costs Susan is the aggravation of the formatting and the cover art. That aggravation of hers fades REAL fucking fast when she sees the royalty statements. They're not as big as mine, but then again, I'm Trevor Fucking Wolff. Big's the only way to go.
Trevor, who writes most of ShapeShifter's music? I know Mitchell wrote that song for Kerri, but who else pens songs?
The three of 'em:  Mitchell, Daniel, and Eric. I'll pipe up when M's doing something stupid, which is most of the time, but I wouldn't say I write anything.
And don't mention that song M wrote for Rusty. Our biggest fucking hit, and it's a fucking love song.

Susan, you must have tried your hand at songwriting. Have you written lyrics for anything? Poetry?
Who doesn't write poetry? I used to get up in the middle of the night in grad school and write bad poetry. Although, I must say when I walked into the poetry workshop one summer, the only time us fiction folk were allowed to mix with the poets, those snooty poet types said it was pretty good poetry -- except it all tended to read like a novel. That totally cracked me up. The fiction people said the exact same thing about my short stories: they read like a novel. Believe me, I see the irony in having more published short story collections than novels.
Trevor, will you guys be touring this next year? Will you do a repeat in Europe?
Ask Mitchell. The only thing I can say is that there are certain things that won't get repeated in Europe. They involve raiding the minibar and stealing a fucking steak knife.
Susan, did you ever do a tour with anyone?
Not officially.

The road crew doesn't stop working just because the band is on stage, do they. How hectic is it back stage - during a performance?